Reviving 'An Hour with you'

Its been a year and a month since I performed my first solo show 'An Hour with you' and wow its a shock to think I made and performed this show a year ago. My solo since its initial performance has had another outing I was proud to perform the piece at the opening of 'The Words at Play Festival' in october last year. It was wonderful to revive the piece which received a lot of positive interest from audience members and the creative writing department in particular. These positive comments and being able to revive the piece briefly for this creative writing festival has encouraged me to extend and develop my solo further about me trying to build a relationship with my grandmother who died before I was born. I feel like I at the beginning of my journey again revisiting my piece because I am revisiting my relationship to my grandmother, but also looking closely at the elements running through the piece reworking some, loosing some elements. 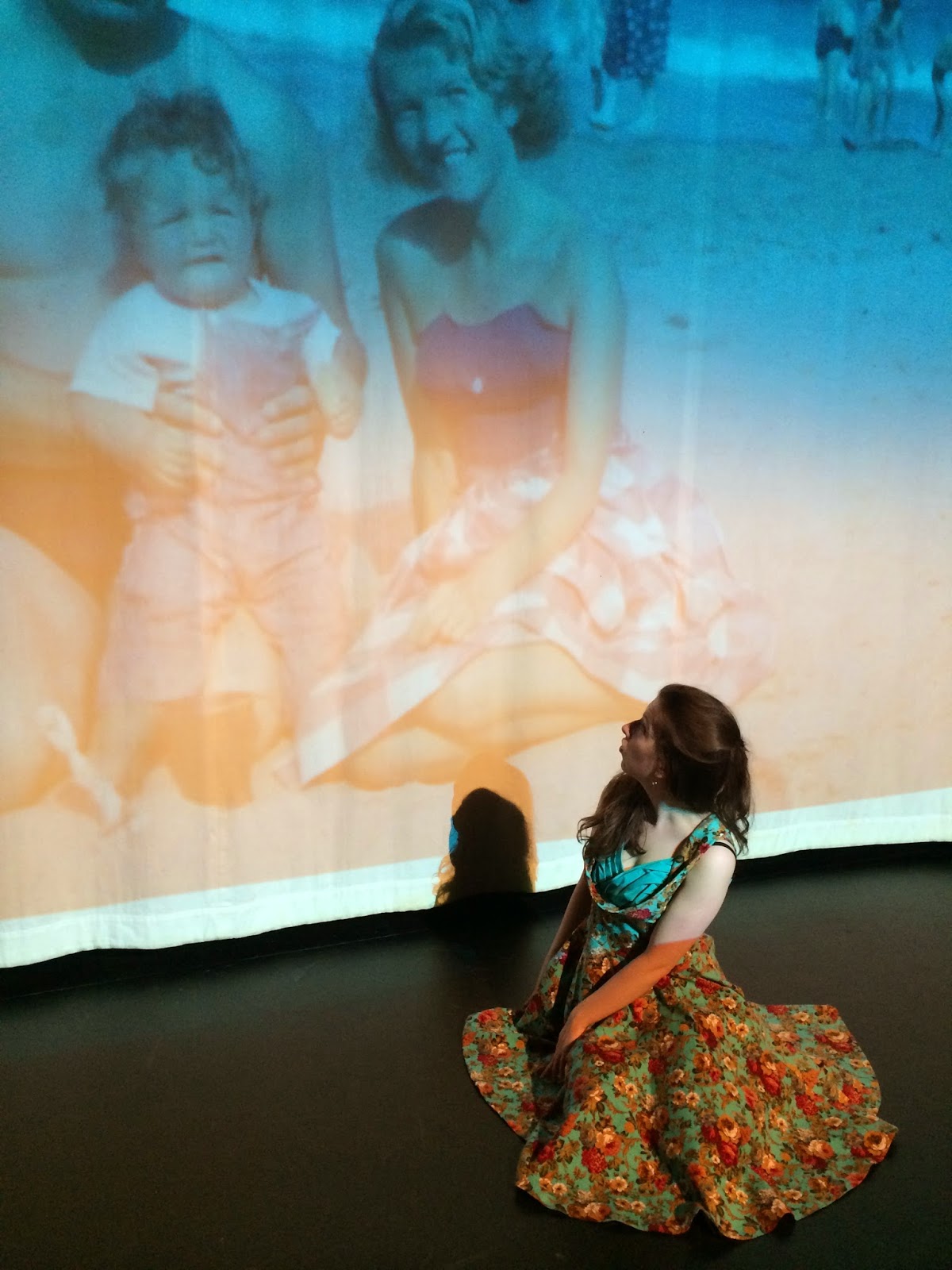 Heading Back to Yarm

A few weeks ago I returned back to the town where my grandmother was born. My grandmother grew up in a small town called Yarm in the North East of England. I visited the town with my dad it was a stange experience returning to the town after making my solo show I felt more closely connected to Anne in a way. Walking past her house and even around the town where she lived made me feel as though I was piecing together snapshots of her life. It was a cathartic experience in a way returning to Yarm I still feel though that I'm trapped in an endless cycle of longing and obsessing over my connection to Anne. 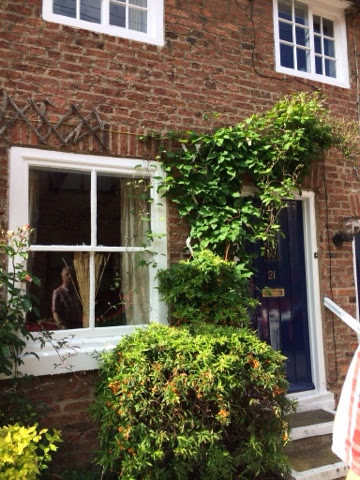 The picture above is the house where my grandmother lived and was a place that my dad visited frequently as a child. Recently I looked at this image again and was intrigued to see my dad's reflection in the window. I felt this image captures my sense of being heavily trapped in an endless need to know her and be somewhat be intrinsically connected to her. I think this feeling will always stay with me it's like part of a continual grieving process for a lost relationship
Posted by Unknown at 10:20 No comments:

'An Hour with You' Documentation Trailer 3 minutes


The last part of my documentation unit I had to complete was creating covers for my DVD cases. I decided to use my poster image of me kneeling in front of the mirror with the letters surroundings me. The reasons I chose to reuse my poster image was that firstly I want to use the same exact image when promoting this work so all my body of work concerning 'An Hour with you' is immediately recognisable as being related to that performance. Secondly I feel that by using my poster image for the covers will perhaps reinforce the themes within my piece to the audience of this desire to connect, obtain something and this sense of longing. These themes of longing and desire to connect may be reinforced by the actual image itself because of my proximity to the mirror  .The warmness of the colours within the image that I have used for the covers perhaps will make my audience feel invited into this very personal and intimate performance.

I measured the front of the DVD case to obtain the right measurements this did take me a while because I am clueless when it comes to anything mathematical.  When I had the correct measurements I rescaled the image to the exact measurement and reapplied the same font for the text which I had used on my poster. I printed two copies of the cover one for my trailer and the other for my unedited ten minute DVD and I placed them within the DVD case. That small act of placing the covers on the DVD cases left me with a mixture of emotions I felt relieved to have nearly completed all of my work for this unit but I did feel a large pang of sadness that the unit has come to an end and that I am no longer working so intensely on this project. However I am seriously considering developing 'An hour with you' further with the aim of debuting it next year on the fringe circuit.
Posted by Unknown at 01:44 No comments:

In the last two weeks of spring term I have spent many hours creating and editing my trailer of my solo performance. As soon as I received the footage of my performance I watched the footage from both cameras. I tried to initially select footage from each camera that corresponded directly with the dialogue I had written for my voice overs. It was tricky to begin with to find the clips which specifically illustrated what my dialogue was trying to say because I had so much footage to trawl through. I also looked at the various footage I had collected together from various rehearsals throughout the process of creating my solo. I was astonished to see when watching early rehearsal videos how particular elements of those early rehearsals have developed and gained more meaning and importance over the course of the rehearsal period. The mirror is an example of this .The mirror was originally in the early stages of rehearsals used in more of an purely aesthetic or symbolic sense to symbolise my search for my grandmothers identity and how my identity is part of hers. The mirror's role developed towards the end of the rehearsal period with me interacting with the mirror through tender physical gestures as though it was my grandmother. The mirror as a physical object obtained more meaning by the end of my rehearsals because it became my only physical connection to her absent world. I decided to use a clip from rehearsal which shows me experimenting with trying to find different ways of interacting with the mirror and then transition gradually into a close up my performance where I interact with the mirror through a sequence of gestures. Similarly when I discussed my final monologue I decided to use two clips from early rehearsals that showed me performing the monologue whilst sitting and delivering it in different ways and then a smooth transition into the performance where I performed the closing the lines. I decided that the transition from my early rehearsal footage of specific elements to the actual footage of the performance with these specific elements helped to show specifically to my audience the development of particular themes within my performance. 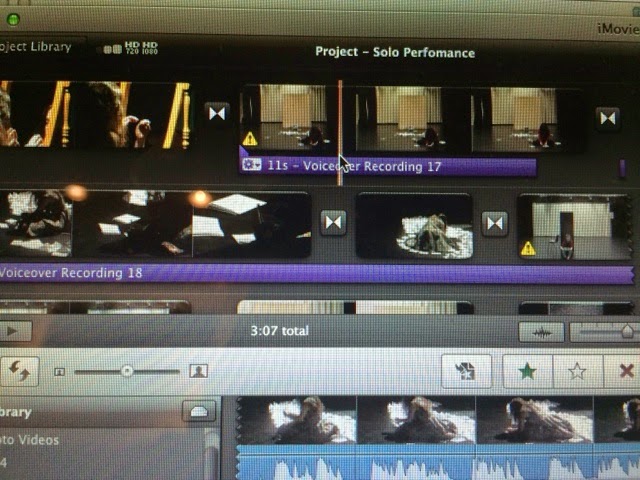 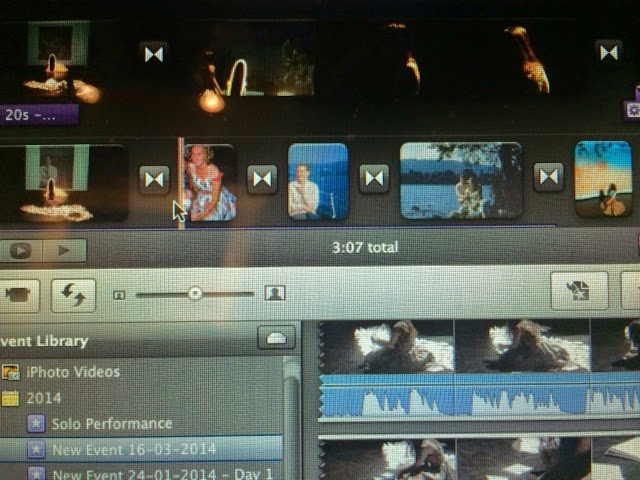 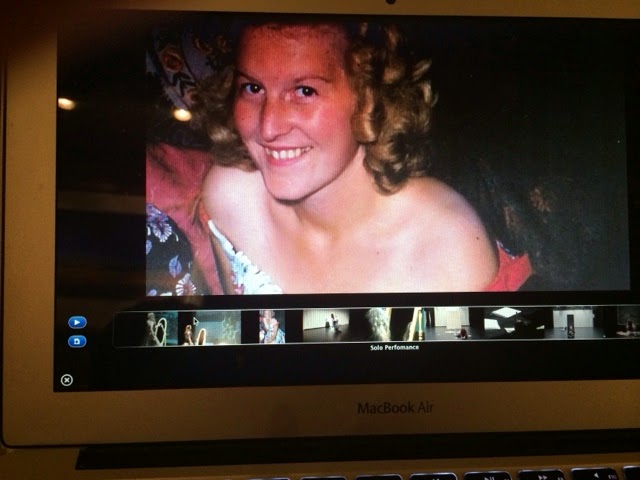 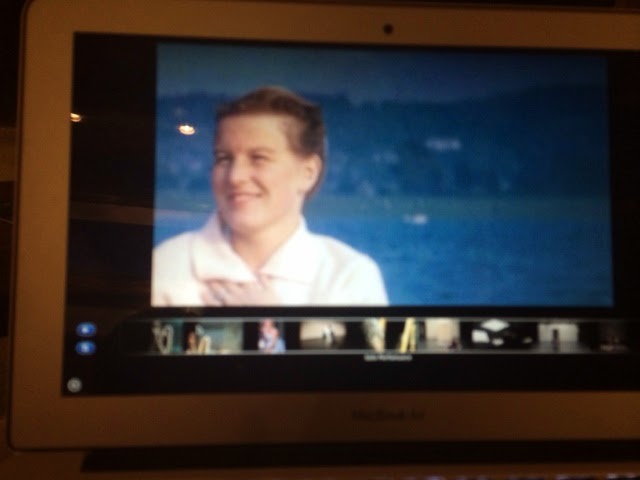 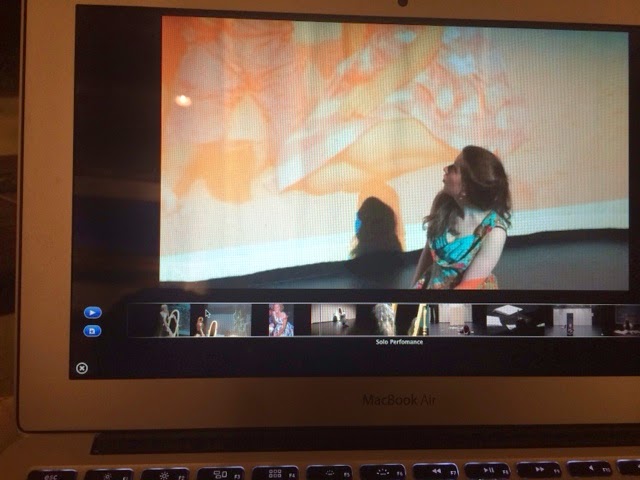 Throughout the process of developing and creating my trailer I was in two minds about deciding whether to film an actual interview about the process of creating my trailer to simply to record voice overs for my trailer. As I began to select clips together and incorporate the clips with the dialogue concerning the meaning behind each element in my performance I found that voice overs seemed to fit well with the clips I had chosen. The voice overs were initially difficult for me to record because I had to adjust the sound level at various times because my voice either became too high pitched or low pitched and it was distracting when trying to view the footage. It also took me a while to record the voice over because I was unsure how to deliver my dialogue for trailer. I was not sure if to deliver it in a formal or informal tone. I eventually decided to deliver the dialogue in a informal relaxed tone to make my audience feel invited into my personal attempt to develop a relationship between me and my Grandma. 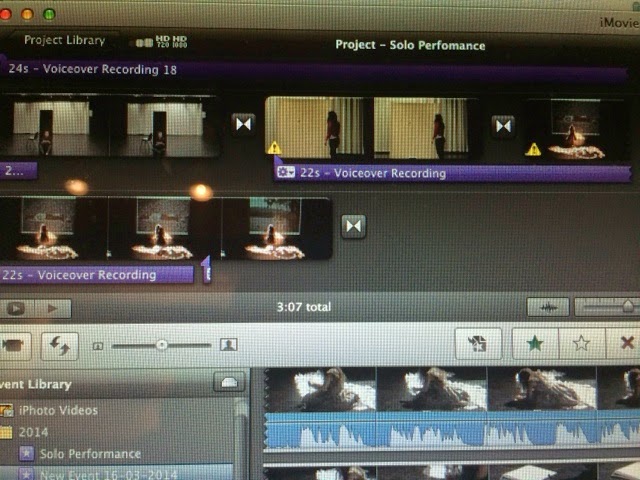 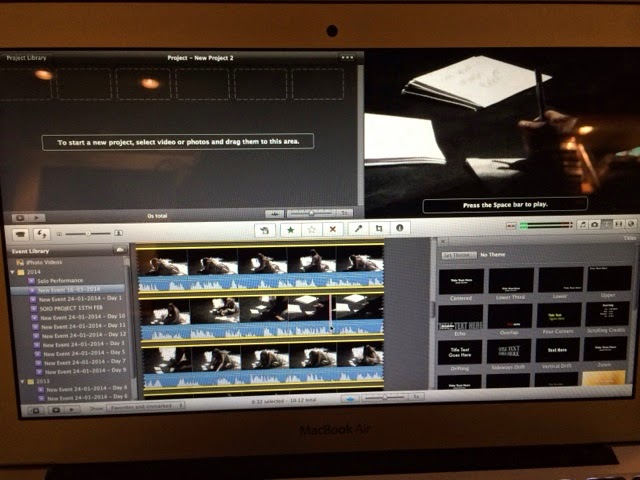 The editing of my ten minute performance was definitely not as difficult as I first assumed it would be. It was a lengthy process of having to copy the whole footage into a new performance project because clips from parts of my close up camera angle footage took a little longer to transfer over. Once all of the footage was transferred into my new project folder I watched the footage several times to make sure that the transitions were fluid from clip to clip. I also watched the footage back to make sure that all the clips were in the right order and that no clips were out of synch otherwise the audience may become confused over the actual plot of my performance. As soon as I had all the clips in the right sequence I watched my performance again and decided that I definitely needed a title page or title at least at the beginning of the video. I did consider for my title page originally using my actual poster image to introduce the performance however there was a clip in the footage from the stationary camera angle that caught my attention. There was a clip that showed me kneeling in front of the mirror surrounded by the envelopes with my grandmothers image projected above me as the lights slowly came up on the performance space. I decided that this clip would be the opening title clip so my audience could briefly experience and have a glimpse of the whole of my mise en scene. I also wanted to use the clip because my grandmothers image can be seen quite prominently so my audience become immediately aware of this figure and my focus upon her.

I managed to finish editing my ten minute performance by Saturday evening and the process of finalising the video did take a good couple of hours before it was completely ready. When the video was finalised I did watch the whole of my performance and I did feel a mixture of emotions. It was a rather strange experience of hearing my own voice on stage and seeing my little figure moving about.  I felt quite sad at the end of watching my performance on the video because I know my solo performance unit is slowly coming to the end. 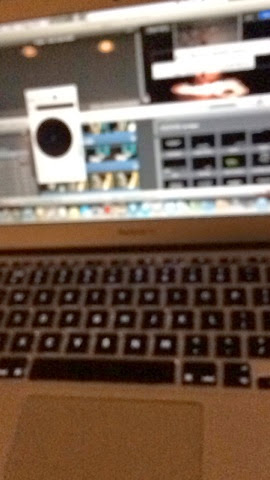 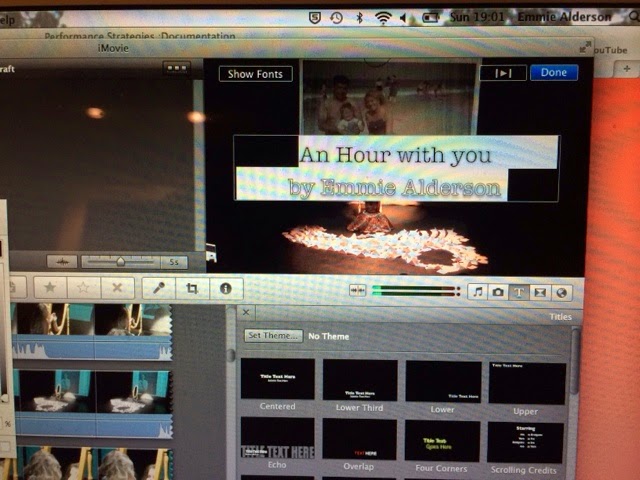 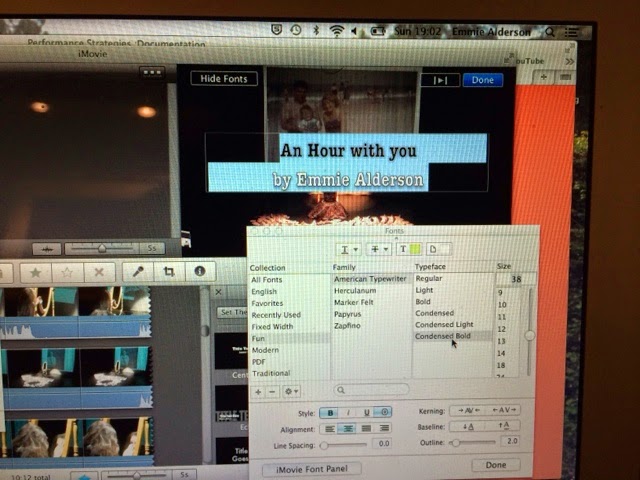 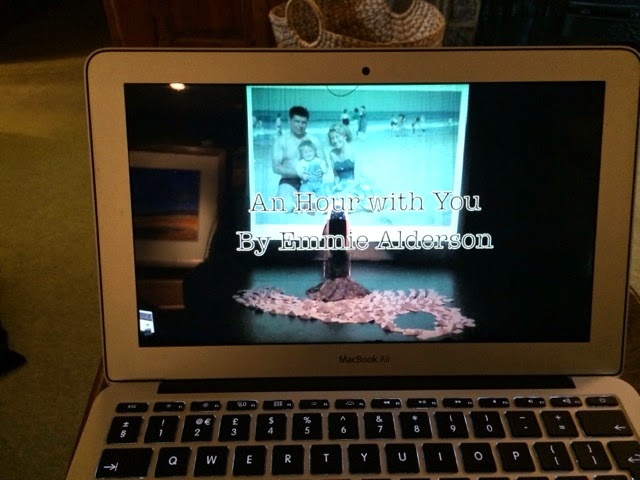